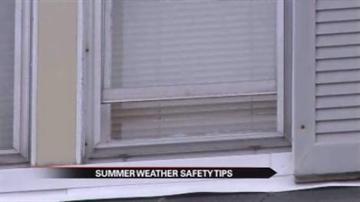 SOUTH BEND, Ind. -- With summer humidity and warm temperatures many people leave their windows cracked when they leave home. Police say around this time of year, burglars specifically look for cracked windows and open doors.

Three homes in three different South Bend neighborhoods were burglarized this weekend. And they all had one thing in common, police say the suspects entered the homes through windows and back doors that were left open.

Police say for people who prey on vulnerable targets, it does not get any easier than a cracked window or an unlocked door.

"They are looking for opportunity. They may knock on your door, if nobody answers the door, they'll figure nobody’s there, they’ll climb in your window, they’ll kick your door in, whatever is easiest." said Lt. Dave Newton with the South Bend Police Department.

According to the police reports, thousands of dollars worth of belongings were taken from each of the people who were victimized this weekend.

Police say intruders look for electronics and jewelry, valuable items that are easy to carry.

In situations like these, items often end up in the pawn shop.