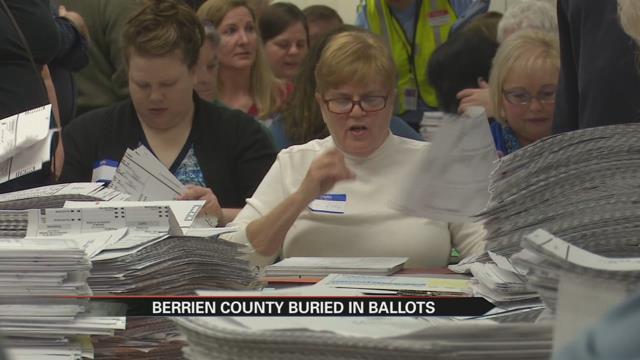 Taxpayers’ money and time were concerns of Berrien County officials during the Wednesday’s recount.

“I know a lot of people have given a lot their time,” said Sharon Tyler, Berrien County Clerk.

Many volunteers worked long hours, burrowing through mountains of ballots.

“Luckily I had the day off from work so thank goodness for that,” said volunteer Yulonda Ward. “I’m here to help.”

“For them to take out of their day to do this for us, they could’ve easily said no,” said Cherry Mesa, Benton Charter Elections Department Worker.

And it wasn’t easy.

“It’s frustrating i can see frustration on their actions and movements but they’re doing the best they can,” said Ward.

While some hoped the process would go smoothly, no one anticipated so many hitches, including finding a way to fund this operation.

Green Party Candidate Jill Stein raised more than $900,000 to pay for the recount, but officials say the total costs for the state could exceed $5 million.

“Unfortunately the taxpayers of Michigan are paying for this recount,” said Tyler.

Another obstacle came midday Wednesday, when an attorney for the Republican Party filed an objection to the recount on behalf of Donald Trump’s campaign.

“This process is a process without a purpose and it delays and disenfranchises Michigan voters and the Michigan public and it needs to stop,” said attorney Victor Fitz.

The process did move forward and finished in the evening, albeit with some confusion.

But that was expected, according to this county’s clerk, in an unexpected election.

“It’s hard to organize that many people and unfortunately today, we could now find a microphone so it may have been a bit hard but as you can see we have progressed unbelievably well,” said Tyler.