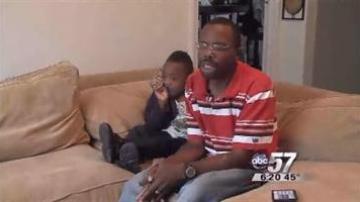 SOUTH BEND IND.-- Vernado Malone's four year-old stepson Ivonne has been taking the South Bend Community School bus from Lafayette Elementary to his daycare for the past two years.  Ivvone has A.D.H.D.  He attends the special needs and abilities preschool.  Recently, he has been doing really well.

Out of the blue, the bus driver refused to drop Ivonne off at the daycare without someone walking him to the door.  Estella Owens, who owns the daycare explained that Ivonne had fallen off the bus a week earlier.

"The aid put the bookbag in his left hand and he tripped on the strap", said the owner of Three Bears Daycare Estella Owens.  She also says would not go out to the bus to get him, because she was watching other kids.  "When he was three, he got on and off the bus no problem", said Owens.

Malone says he does not know how he is going to get Ivonne from school to daycare, because he works full time and his wife goes to school full time.
He wants to know why he was not notified earlier that his stepson fell off the bus.

"A week ago he fell off the bus..you didn't call me.. his mom.. the school.. I want an incident report", said Malone.