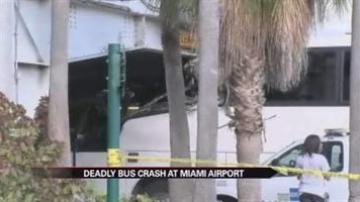 MIAMI -- New information has been released on the deadly bus crash at the Miami airport.

Two people were killed when a bus slammed into an overpass. Reports indicate the driver took a wrong turn.

The entire bus caved in and the ceiling collapsed leaving dozens scraped and bloody.

More than 30 were injured and two senior citizens were killed.

Police say the driver got lost and somehow ended up at the airport.

Plowing his bus straight through an 8-foot concrete overpass.

"We are not sure why he misjudged the terminal building. This person obviously didn't know where he was going," said Greg Chin, Miami International Airport Spokesman.

The driver even mowed down a sign warning vehicles more than 8 feet tall to turn around.