Bush after 9/11 says he has no regrets 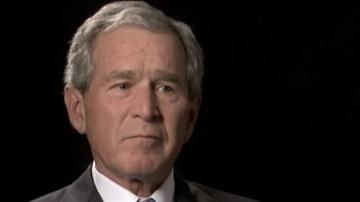 A decade after the terrorist attacks that defined his presidency, George W. Bush said he doesn't regret any decisions he made after 9/11, including the war with Iraq and the use of controversial interrogation techniques that some considered torture.

Asked if he believes those polices — including the USA Patriot Act, which widened government access to Americans' communications and records — prevented another attack, he said, "Yes, I do."

"Some of the tactics could have been different" in Iraq after Saddam Hussein was deposed, Bush said in an interview with USA TODAY. "Same with Afghanistan, same with the terrorist surveillance program" that eavesdropped on suspected terrorists' international communications.

Still, he said, objective historians will conclude his policies "were necessary in order to protect the country."

Bush said the events that led to the death of al-Qaeda leader Osama bin Laden in May began during his administration.

"The work that was done by intelligence communities during my presidency was part of putting together the puzzle that enabled us to see the full picture of how bin Laden was communicating and eventually where he was hiding," he said. "It began the day after 9/11."

Saturday, Bush and his wife, Laura, will lay a wreath at the Pentagon and speak at the dedication of the Shanksville, Pa., memorial to Flight 93. Sunday, he'll attend the New York 9/11 ceremony.

Bush said he is concerned the nation is "becoming isolationist" and will "grow weary to the point where we say it doesn't matter" whether young democracies survive.

"Democracies, when they take hold, yield peace," Bush said. The Middle East "is the part of the world that needs peace, and we'll be successful — unless, of course, we quit," he said. "My concern is that isolationist tendencies … cause America to retreat from the world."

Except for his wedding and twin daughters' birth, he said, 9/11 was "the most profound moment" of his life: "It will always be vivid."

Bush also shared his thoughts on:

•What he remembers most about that day after he learned of the attacks in a Sarasota, Fla., second-grade classroom. "I, of course, remember (White House Chief of Staff Andy Card) whispering in my ear. I remember the faces of the children. … It was a moment of clarity because people were going to watch how I reacted, and I had enough experience with crises to understand that if you're head of an organization, it's important to project calm in the initial stages of a crisis."

•His first thoughts. "The key thing that I tried to do was to say let's gather facts so we know what's happening. The problem that I faced — and the truth of the matter is, many in my administration faced — was during certain moments during the day, there was a fog of war, and the information flow was just really inaccurate. … We needed to take steps to make sure that the attack was a four-plane attack, not a 10-plane attack. We just didn't know. … My mind eventually became focused on finding out who did it and seeking justice, but initially it was respond and prevent."

•Watching on TV as thousands of Americans died. "There were moments when I said I'd like to be alone and just thinking through the ramifications and making sure that my thoughts were clear. I prayed for the victims. I prayed for our country. I would see people jump off buildings, and it just was horrific, but I was also determined to lead the country."