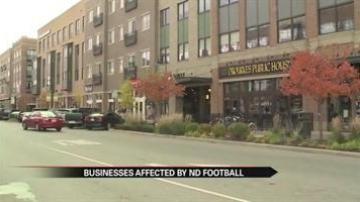 NOTRE DAME, Ind. -- Businesses on Eddy Street say they have had a successful season so far, thanks to an Irish fan base rollover that comes from last year's successful season that ended with the team in the BCS championship game.

“Last year really helped us out, just because they went to the national championship, so I think a couple more fans jumped on the bandwagon and it helped us out and basically tripled our business,” says Jordan Mullins, Manager at The Mark.

That successful season is helping Michiana businesses this 2013 football season, despite this year's 7-3 three record.

Some say they are not worried about a decline in any foot traffic for the next home game against BYU.

“Even though we have lost three games now, every single weekend that is a home weekend we are just busy,” says Mullins.

“I think if anything we will see more people coming in just because it is the last home game," says Shelly Freitag, Manager at O'Rourkes.  "Any chance people have to go to a Notre Dame game they are going to go for it.”

One of the most important factors for businesses is the weather.

“If it’s raining, a lot of people will come inside just to get out of the rain, so we definitely favor the clear days over the rainy days,” says Freitag.

“The weather helps, I mean cold weather and coffee, kind of help us out,” says Lisa Russell, Manager at Biggby Coffee.

Despite a winning or even losing season, some businesses say the fans will still stop by their favorite Notre Dame spots.

“Notre Dame has a really good loyal fan base and even if they are losing we are still seeing the same people coming in town from out of town to go to the games,” says Freitag.

Another factor that has played into successful business for some, is the few night games the Irish have had this season.

Businesses on Eddy Street tell ABC 57 that they favor those games because fans will spend more time visiting and spending money in town.