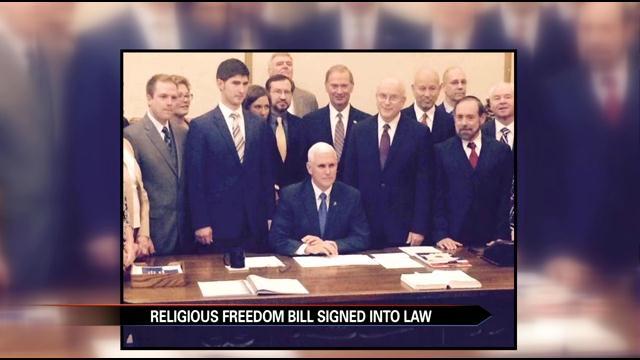 The controversy continued throughout the state.

And now, Michiana business owners are divided on the issue.

Over 36,000 signatures from Indiana residents filled an online petition Wednesday, looking to remove the governor from office after signing the bill into law.

Other Michiana businesses are holding silent protests by placing an "Open for Service” sticker on their doors.

Similar protest groups are gaining thousands of supporters in a matter of hours.

But some businesses do support the new controversial law.

Mike Strauss, the owner of Snag-A-Pro, says this law is less about enabling prejudice and more about limiting government overreach in small businesses.

“I don't call that discrimination," said Strauss. "That's just their belief and they're allowed to do that. I can go somewhere else and i can shop somewhere else. I have no right to tell someone they have to serve me simply because they don't like me, they don't like how i look, you know one thing or another.”

Strauss says he's a proud Christian and would never discriminate against his customers.

“As a Christian I show love, compassion and mercy for anyone and I do not have a problem with anyone coming to my business no matter who they are, what they look like or what they do in their life," he said. "However I do still reserve the right to refuse service to anyone.”

He also thinks if businesses do use the law to turn away patrons, customers have every right to go elsewhere.