Businesses get ready for Easter weekend in South Bend 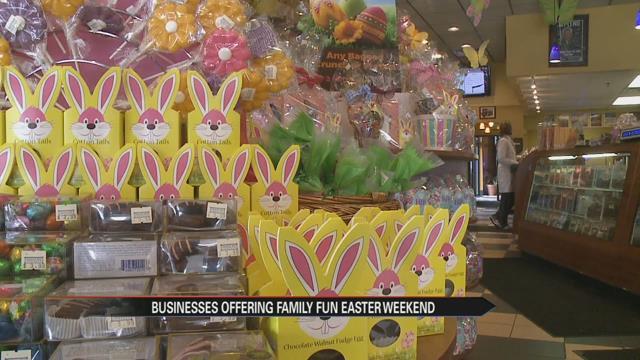 Tiny snowflakes were falling down on South Bend Friday morning but just hours later the sun was shining on Michigan Street.

“All winter long you are stuck inside you are busy and so you want to just enjoy spring time,” says Sam Centellas, a South Bend Resident.

Centellas says this time of year is about the time cabin fever strikes his family.

“The kids are bouncing off the walls and they just want something to do they want to be able to run around outside,” says Centellas.

Friday afternoon many others in south bend had finally broken free from the indoors as they strolled down main street.

“One of the reason’s you are in a downtown is because the foot traffic is amazing,” says Andrew Elegante, owner of South Bend Brew Works.

Elegante will be opening up outdoor seating at his restaurant on Saturday at noon.

Sunday South Bend Brew works will be hosting an Easter brunch and a Dingus Day dinner on Monday.

“It’s the launch of the season so for people who want to get out of the house I want to get out and sit in the sun it may not be super warm I may have to wear my coat but dang it I’m outside,”

The patio is dog friendly but being a bar it’s 21 and up.

Just down the street all ages can get a sugar buzz at a place that says Easter weekend sets off the busy season.

“Ya get a lot of people who want to get out ya know they are cooped up cabin fever. When the weather starts hitting that 40’s and 50’s mark it feels like 80 to us ya know,” says Angela Vasquez who is a Manager at South Bend Chocolate Company.

Vasquez says the downtown store will have the Easter Bunny visiting Friday from 5 p.m. until 9 p.m. and Saturday 12 p.m to 5 p.m.

Vasquez says they have plenty of Easter baskets pre-made and ready to go.

“We know it’s not going to be 75 and sunny this weekend but we are going to go outside and have a good time,” says Centellas.