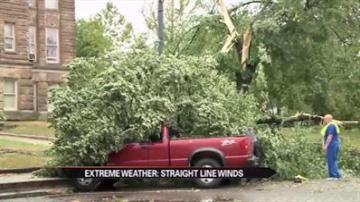 Tornadoes, like this one that went through Henryville last spring or Oklahoma this week get all the headlines, but are extremely rare, especially in Michiana.

Compare that to straight line wind, like storms the rolled through Starke County last June that downed trees and radio towers. These are more frequent and affect more people in Michiana.

"This is the part of the county that favors so called squall lines and bow echoes, and these are the type of thunderstorms that that are most prolific in producing severe winds," say Jeff Trapp, Purdue Meteorology professor.

Storms that typically produce tornadoes, called supercells, are pretty rare in this part of the country.

"It has a longer lifetime, larger size and one of its main characteristics is, it exhibits rotation," said Trapp.

These cells start out west, are more isolated in nature, but things change as they move east.

"Part of that evolution are these individual storms coming together to make a system, and once they're organized into a system that can span the entire length of Indiana," Trapp said.

The largest tornadoes width rarely exceeds one mile. Now most are far smaller than that. That means that a tornado in Michiana would rarely affect more than a mile, where straight line wind could affect tens, if not hundreds of miles.

So why does Michiana see more severe straight line wind than tornadoes?

"Part of this relates to where we are relative to the Rocky Mountains and Gulf of Mexico," Trapp says.

The complex of storms out west evolve into a mature system as warm moist air from the Gulf crashes into cool air from Canada., producing lines of storms instead of individual cells.

Michiana is just in the right place, when conditions are right for storm development.