Butterfingers and drug bongs on many mini-mart shelves 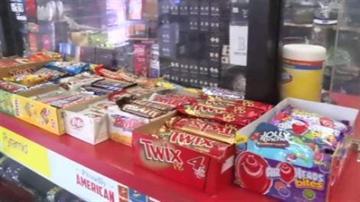 SOUTH BEND, Ind.-- It happens everyday, you go get gas and bring the kids along. Before you know it, they want a candy bar, so sometimes you let them reach to get one. But it’s not just candy on some mini-mart shelves in Michiana, but drug bongs and bowls as well.

Parents say a bowl for marijuana shouldn’t be sitting next to a Butterfinger, but it’s an all too common sight in many mini-marts on South Bend’s West Side.

“There's all these different flavors, there's grape and strawberry and razzleberry and all these different types of flavors that attract the kids and many of these store owners don't have the ethics or the scruples to not sell to them," said Karl Nichols, executive director, Saint Joseph County Minority Health Coalition.

City officials say it’s just not okay for bongs and bowls to be out for all to see.

"We don’t want a business to feel that they’re unwanted or not welcome here in South Bend, Indiana, but we want to be able to make sure that their business is what the community really wants," said Henry Davis Jr., Second District Common Council member.

Because many people have voiced concerns over the pipes, cigarillos and illegal single cigarettes saying they’re not the best things to offer our children.

"Best case scenario is that if there’s something that they’re allowed to sell, make sure it’s not in front of the kids and given them the opportunity to figure out what it is and also trying to figure out how to use it," said Davis Jr.

Jacob Hughes, tobacco prevention coordinator with the Saint Joseph County Minority Health Coalition, fights this everyday. That's why he's teaming up to get legislation written and in front of the common council.

"We're hoping that everybody understands the need for these stores to raise the standard and raise the bar on their stores," said Hughes.

It's the beginning stages for the legislation, but it aims to hold the owners of those mini-marts accountable.

"Stores have different challenges towards one another to make them more appeasing to the community so they might allow this or try to allow this to help their store, but you know that's unfair and at the same time it does an injustice," said Hughes.