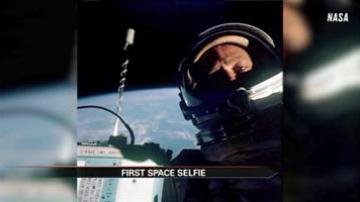 The selfie craze may seem like a recent trend, but legendary astronaut Buzz Aldrin tells a different story.

In fact, he claims he took the first space selfie back in 1966 when he walked on the moon.

While docked to another aircraft,  Aldrin, along with an experimenter from Northwestern University, wanted pictures taken of ultraviolet stars.

"Look at that horizon, curved a little bit, and the clouds are way down there. I wonder what the picture's going to look like. I didn't realize that I was pioneering the selfies," says Buzz Aldrin.

Sunday will mark the 45th anniversary of the first lunar landing.
Share this article: