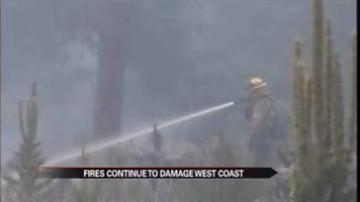 PONDEROSA, Calif. -- Firefighters in California are trying to contain another fast moving wildfire.

In just three days the Ponderosa fire has scorched more than 23 square miles.

At least seven homes have been destroyed and thousands more are threatened.

Zachary Pritchard barely escaped the flames on his ATV. He burned his arm in the escape.

"It was like I was in a black box and I just drove through it and I couldn't breathe," Pritchard said.

The massive fire is one of the dozens still burning throughout the western part of the United States.

There is some good news for the firefighters.

The temperatures are starting to come down. And that makes the long days a little more bearable.