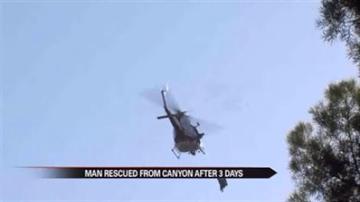 UNIVERSITY HEIGHTS, Calif. — A 30-year-old man is safe after being rescued from a canyon where he was stuck for three days. He was airlifted out of the San Diego Canyon.

A neighbor heard him moaning and yelled out. That's when he heard the man's voice.

"I've hiked around the area a few times so I kind of knew where he was," said Kip Davis, a neighbor. "It was a no-brainer that I went down with him."

The injured man had been trapped in the brush. He is believed to be homeless.