Can South Bend weather on Election Day predict the presidency? 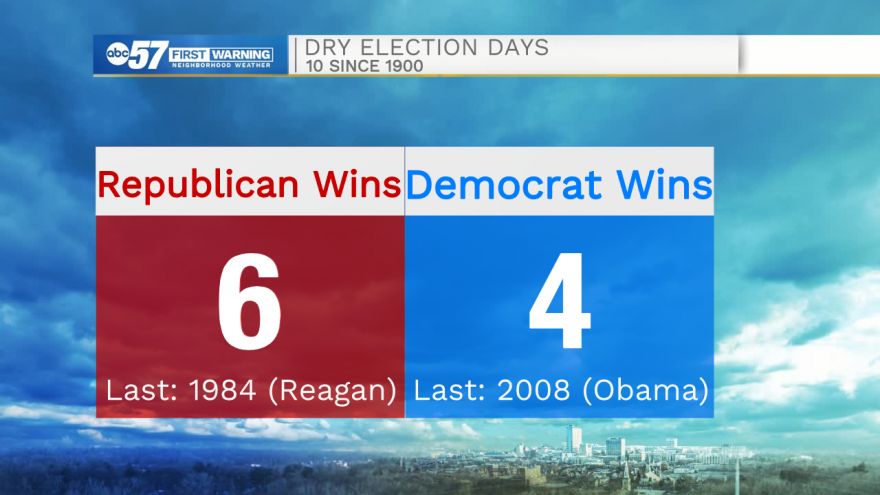 I'm going to let you in on a little trade secret: meteorologists usually LOVE Election Day.

Why? Most of the time, if the weather is quiet, Election Day is our easiest day of the year in the office. Our job is typically to show the 10-day and stay out of the way.

Where's the fun in that, though? Meteorologists get paid to predict things (the weather)! Today, most people want to know who is going to win the presidential election.

But, what if the two (weather and the election) are connected? Can the weather on Election Day in South Bend, Indiana, predict who will occupy the White House?

I took a look through 120 years worth of election day weather data (30 presidential elections) to try and find out.

The short answer is: no.

The longer answer is: still no, but with some interesting facts and trends!

Before I go any further, I want to make it clear that this is just for fun. I am not endorsing a political party, nor am I making some sort of political statement.

However, I will let you know that by using this method (studying the Election Day weather in my current location at the time), I accurately predicted that Donald Trump would win the presidency in 2016 (I was in Pennsylvania four years ago) and that Tony Evers would become governor of Wisconsin in 2018.

With that being said, here is what I found: 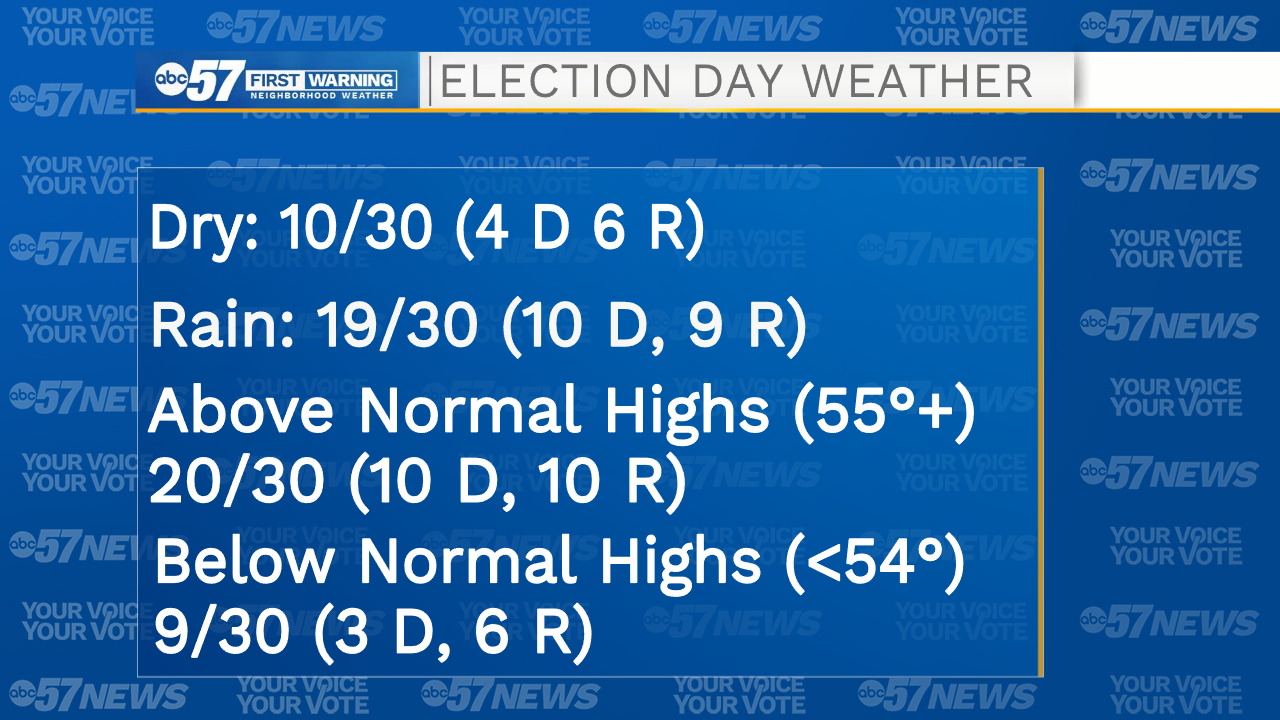 Election Days don't usually look like 2020's version in South Bend. In fact, only 10 out of the last 30 presidential Election Days have been dry across Michiana. A Republican has won the White House six times out of 10 under these circumstances. 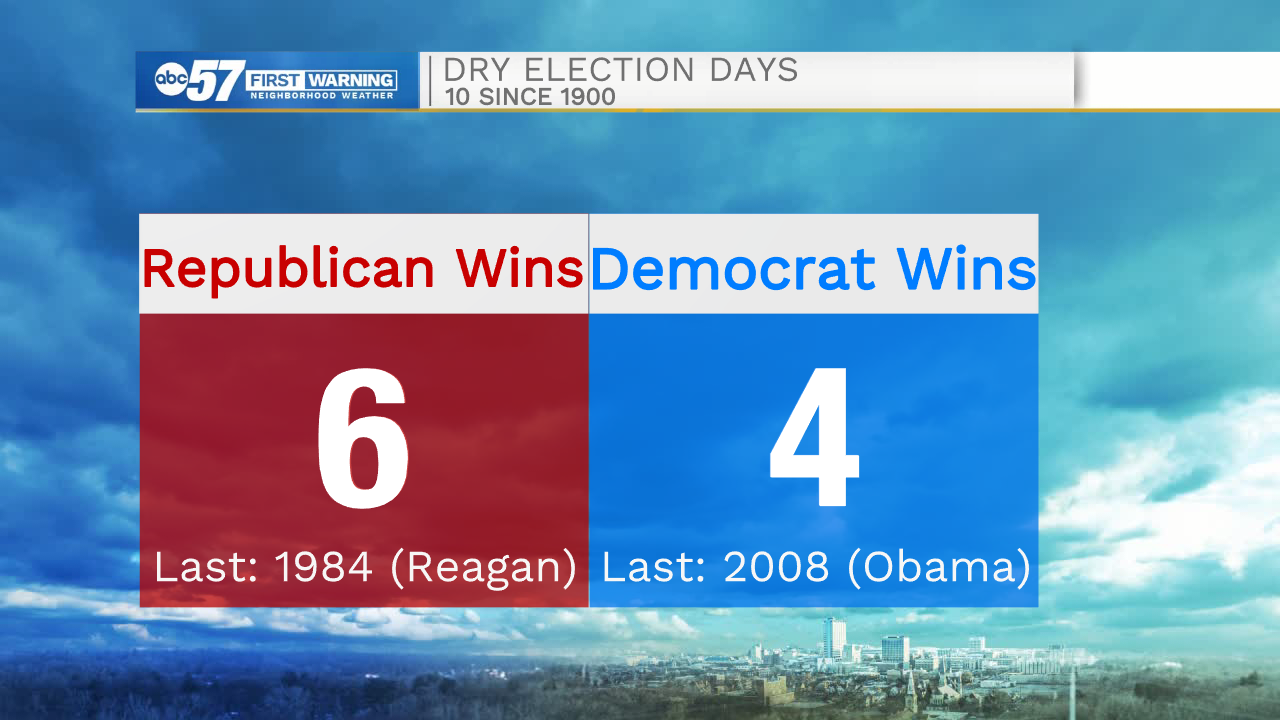 Rain has fallen on 19 out of the past 30 Election Days. The winning percentage of a particular party in these cases is basically 50-50 (9 Republican wins, 10 Democrat wins).

South Bend did record a trace of snow back in 1920 along with rain, when Republican Warren G. Harding won the presidency. The precipitation data for the 1900 presidential election was missing in South Bend, so it was not considered in this section.

It made no measurable difference if you compared cold rainy days to warm rainy days in South Bend, with each party basically doing equally well in the race for the White House.

However, something interesting did pop out regarding dry days.

Overall, Republicans have a slightly better track record of winning the presidential election on dry days. However, on dry days where temperatures reached highs of over 65 degrees, the Democrat won the White House every single time. 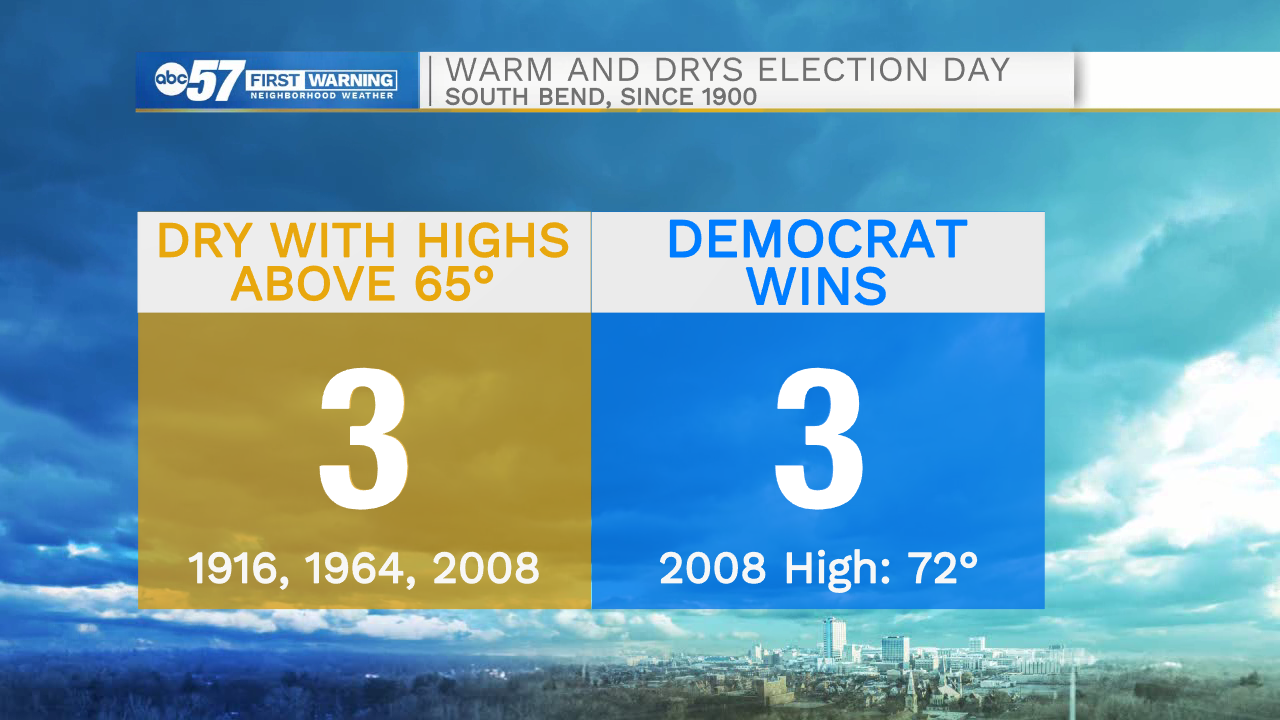 Why does this matter? Well, Election Day 2020 has been dry in South Bend, and highs have eclipsed 65 degrees in South Bend.

If this pattern holds, the Democrat (in this case, Joe Biden) theoretically should win this time around, too.

We'll see what the next few days bring!