Cancer patients get a second chance at a high school prom 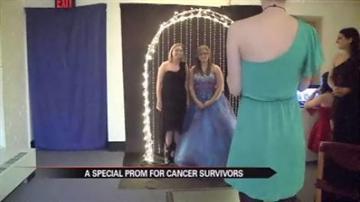 SOUTH BEND, Ind. – Everyone remembers their first high school prom; picking out the perfect dress, hoping to get asked and just dancing the night away with friends.  However some teenagers are not as fortunate to go to their prom because of their health concerns.

That is why St. Mary’s Stand Up to Cancer group held their prom for high school students with cancer to get their second chance at that special night.

“I had AML acute myeloid leukemia. It is cancer in the blood,” said cancer survivor Keondia Woodley.

All of the students either have cancer or are in remission.

“I lost all my hair. I got down to fifty-nine pounds,” said Woodley.

Keondia Woodley and her mother said the cancer treatments were trying.

That is why Stand Up For Cancer volunteer Devon Graham said the prom was so important to put on.

“Leaving their hardships as much as they can and their worries at home and just coming out and really enjoying themselves,” said Graham.

Theresa Woodley said at one point she was worried her daughter would not make it.

“It was to the point if it was time for her to go it was,” said Theresa Woodley.

And now almost five years later, since Keondia Woodley was first diagnosed, she is in remission and dancing the night away at a very special prom.