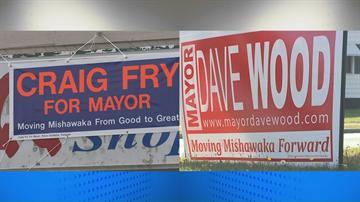 SOUTH BEND, Ind. - Mishawaka’s mayoral candidates squared off on stage for a debate at Indiana University’s South Bend campus Monday evening.  State Representative Craig Fry (D – Mishawaka) is taking on incumbent republican Mayor Dave Wood.  Though both candidates vowed that the night’s debate would highlight their differences, it started out with them agreeing on their top priority: jobs.

“I’m all about attracting jobs to Mishawaka and this mayor and the previous mayors have not done a good job of that,” explained Fry.  “A living wage job is a job that supports a family, it’s not a retail job paying minimum wage, and we want real jobs that have benefits.”

Mayor Dave Wood also explained that his priority is bringing jobs, of all levels, to Mishawaka.  He defended his record on bringing employment to Mishawaka.

“We’re seeing manufacturers, now expanded, paying good wages and a lot of smaller companies that are expanding every day,” Wood explained, saying he didn’t like Fry’s take on retail jobs.  “To insult a sector of business and say that’s not what we want, I think that insults our business owners.”

Another issue that arose during the debate was the state of education.  Fry insisted that the mayor’s office should take a larger role in developing education policy in Mishawaka.

“I think the city needs to be involved because we have 50-percent of our children that are on free and reduced lunches and it causes us problems in success rates with our kids,” Fry explained, saying that better education would bring economic benefits to the city.  “It brings corporations into our community if we’re doing innovative things in education.”

Fry wants to add pre-kindergarten classes for every 4-year-old in the city as well as bringing more vocational classes to schools.  Mayor Wood maintained that he’s used the power of the office to partner and help schools, but that’s as far as he’d like to go.

“Attempting to get in and run the school system is something all-together different,” Wood explained.  “I’m running for mayor, not school superintendent.”

Fry made it clear that he feels he has a fight ahead of him in Mishawaka.  He explained that, with one exception, Mishawaka has had a republican mayor for almost all of the past 50-years.  During the debate he made it clear to the audience that they should be open to a democrat.

“I’m a fiscal conservative that will operate city government on a shoe-string,” Fry explained.

Mayor Wood responded that he’s already operating the city efficiently.
The election is drawing closer and both campaigns made it clear that they will be ratcheting up to get out the vote…in their own way.

“I believe that running campaigns that tell the truth is critically important,” Fry explained.  “This mayor has made some critical mistakes, misjudgments, bad judgment and I’m going to point those out.”
Mayor Wood explained that he will be ratcheting up his campaign as well, but differently.

“There’s a stark contrast in the type of campaigns that we’re running,” Wood explained.  “I can only control mine, my campaign is an extension of who I am as a person and that’s what you’re going to see.”

Both campaigns promised they will be fighting to get out the vote ahead of the Nov. 8 election.