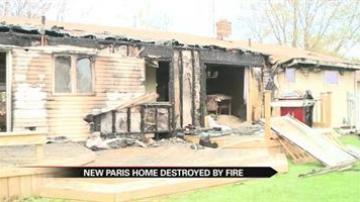 ELKHART COUNTY, Ind. -- Jim Erb ran for Elkhart County Auditor in Tuesday's primary and lost. A few hours later he lost his house to a fire. He says his 9-year-old saved the day.

"I don't know how many times I told him 'You're my hero.' Dude you are the hero seriously, you saved all of us," said Cheryl Erb.

Jim Erb was running for county auditor on the Republican ticket.

"It was a contested race -- we had friends over to watch the results. We had snacks and things like that," said Jim.

After finding out he lost, his family went to bed.

He woke up to smoke and flames in the house.

Jim ran outside and grabbed a hose while his 9-year-old son woke up his mother.

"We believe the fire was started by somebody with the way the deck and stuff was burned," said Jim. "It makes me sick -really sick that someone would go through extreme whatever the reason is. I just can't imagine light someone's house on fire."