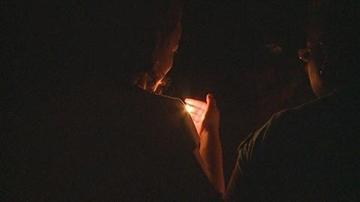 People gathered for over two hours outside of the home that was part of a violent crime spree in Elkhart early Monday morning, after a house fire killed two young boys and their father.

The flickering candles shed light on watery eyes, as tears streamed down the faces of several in attendance.
Sniffles could also be heard across the somber crowd.
Players and coaches made a banner for Ricardo, who was a member of their soccer team, and they said they dedicated their season to him.
Some people dropped off clothing, as well.
A fund has been set up through Chase Bank. Donations can be dropped off at the Bristol Street location in Elkhart.
Food, clothing, and other donations can also be made at the Boys and Girls Club.
Share this article: