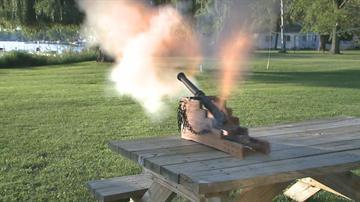 KOSCIUSKO COUNTY, Ind. – A small backyard cannon is pitting neighbor against neighbor in the area around the Barbee Lake Chain in a debate over pyrotechnic displays around the neighborhoods.

Earlier this week angry residents took to the Facebook page of Barbee Lakes Neighborhood Watch complaining about a cannon being fired and commercial grade fireworks being lit off.  Some claim the loud booms shake their houses late at night disrupting the peaceful setting around the lake and traumatizing pets.

Most of the anger was directed at Scott Vielee, who lives with his family off of North Barbee Road.  Vielee said he doesn’t fire off anything late at night and, despite some claims to the contrary by neighbors, his cannon is legal.  Neighbors of Vielee say he is not the only person who shoots off fireworks in the area.

“What I'm doing is 100-percent legal and I do apologize to law enforcement for having to come out here all the time and deal with this," Vielee described.

Police have been called to the Barbee Lakes many times this summer for noise complaints regarding cannons and fireworks.  Believe it or not, situations involving cannons are surprisingly common.

“The cannon situations do typically surface every two or three years,” explained Sgt. Chad Hill of the Kosciusko County Sheriff’s Department.  “There are actually a lot of these cannons throughout our lakes, we actually have 102 lakes in Kosciusko County and some of the larger ones: Lake Wawasee, Tippy, Chapman, The Barbee Lake Chain which is seven lakes, there's quite a few of these cannons in different locations."

After checking with the Indiana State Police and the Bureau of Alcohol, Tobacco and Firearms the cannons were determined to be legal.  The Kosciusko County Prosecutor’s Office said that the cannons are antique firearms that are allowed for recreational use by state law as long as they only make sound, show smoke and don’t fire a projectile.  It is legal to possess the black powder the guns as long as it isn't over 50-pounds.

As far as the problem of the booms, there is no county law regarding noise or disturbing the peace.  Though officers who are called out to complaints can make arrests or citations for disorderly conduct based on the officer’s judgment of the situation, something the officers who’ve been called to Scott Vielee’s neighborhood so far haven’t deemed necessary.

Deputies and neighbors in the Barbee Lakes area are hoping the booms and the controversy dies down as summer ends.

“It actually will subside quite a bit after the Labor Day weekend,” Sgt. Hill explained.  “In my 20-years we look forward to when Labor Day has arrived.”

It is possible that the county could pass some sort of ordinance limiting the time when the cannons and fireworks could be used; previous efforts to create a noise ordinance have failed according to Sgt. Hill.  Some of the Barbee Lakes residents who are opposed to the cannons and late night fireworks say they are looking into creating a petition to do something about the problem.