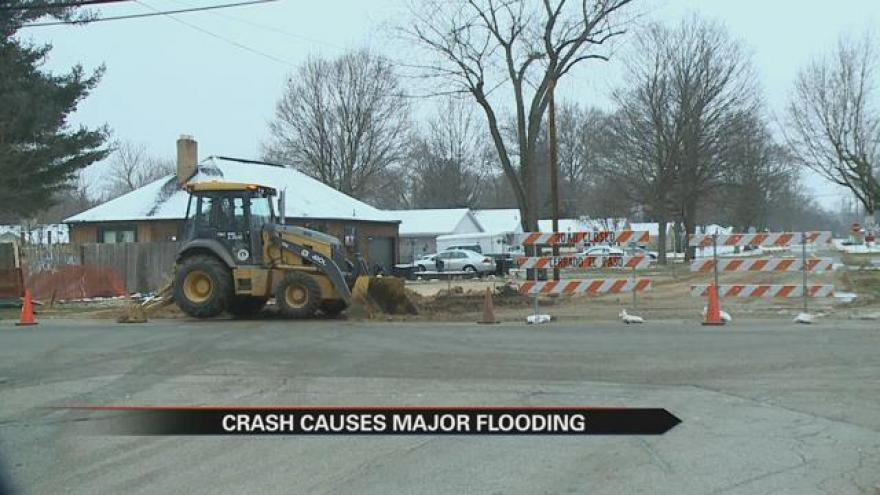 This morning a car crashed into a fire hydrant causing flooding in an Elkhart neighborhood. According to Elkhart PD the crash happened around 2:30 Saturday morning on Johnson street and Modrell avenue. Now neighbors are left dealing with the after math of this accident.

According to Elkhart PD the suspect and the car are not yet located. The passenger of that car was on the scene, but was uncooperative and refused medical treatment. Neighbors say accidents like these happen all the time in this area because people are driving too fast.

“I think they need speed bumps or something,” said another neighbor with water damage in her home. “They need something to slow people down.”

That woman, decided to stay off camera and remain anonymous, but tells ABC57 she’s been living in this area for a while now. On Saturday morning her thoughts were “it’s just another crash” until she stepped outside.

“At first we thought it was just the yard and my fence. The policeman assessed at about $2,000. Well now it’s my basement, my furnace, my yard. We’re probably looking at upwards of $20,000,” she said.

She tells me she heard that the driver was intoxicated, which drove her to write on her fence. “I was so angry I had to take my frustration out I spray painted “think before you drink”. I take pride in my yard, my yard is my everything.”

According to Sergeant Chris Snyder with the Elkhart PD the suspect and the vehicle is described as a truck, but police are still unsure if alcohol was a factor. Around 1 p.m. crews were quickly working to get this street back to normal.

A vehicle struck the fire hydrant which busted off one of the water mains, causing major flooding in the area of Modrell,” said John Faigh, the Director of Emergency Management. “It’s been repaired, now we’re going to clean the street.”

Mayor Tim Neese arrived to this scene around 8 a.m. and started knocking on doors.

“I spoke with a number of people just asking if they had any water damage,” said Neese.

He added he was able to see some of the flooding that had happened before water started lowering. “When I got there it had went down quite a bit, not really what I would call dangerously noticeable, but I did talk with residents that said that it was several inches high, half way up their vehicle tires.”

Another neighbor who lives less than a block away tells me they all took measures into their own hands because crews didn’t get there until 6:15 a.m.

“Tried to work on street drains to get those free of smudge that was causing some of the issue. It’s kind of expected that we were knocking on doors taking care of each other.”

The woman with water damage in her home is setting up a meeting with Mayor Neese on Monday to talk about speed limits and drunk driving on Modrell.