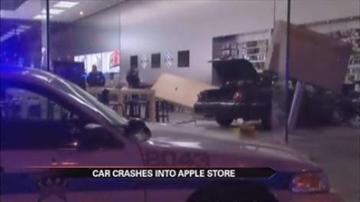 CHICAGO -- Customers inside a Chicago Apple store were shocked when a car came crashing through the glass window Sunday night.

Police say an elderly driver lost control of his car right before it smashed into the store's front window.

Witnesses say there were some minor injuries.

"He tried to slow down but I think he hit the wall thats really what stopped him," said Shirley Susman, eyewitness.

Police at the scene said they weren't sure what caused the driver to swerve off the road and hit the store.