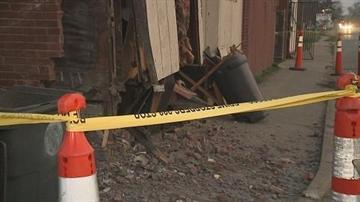 SOUTH BEND, Ind. – Ten South Bend residents were evacuated from their apartments after a sedan slammed into the building, knocking the structure off of its foundation early Thursday morning. Police said the man and woman in the car were rushed to the hospital and in I.C.U. as of Thursday afternoon.

Officers said alcohol may be to blame; the driver lost control on the railroad tracks two blocks down the street, before crashing into the building, located on Olive and Lawton Streets around 3:30 a.m. on Thursday.

Residents who live in the building said they heard loud booms, and rushed out the door to see the brick crumbling and caving in.

“I was sound asleep and the next thing I know I heard a loud boom! And so me and my fiancé we jumped up. And then I heard a lot of screaming and crying so I immediately called 911,” said Yolanda Davis.

“I heard some tires squealing, and then I heard a great big old boom! And I said well somebody ran into the building baby,” said LaSanders. “It’s a terrible tragedy. And I hope everyone will be okay.”

Yellow tape blocked off the building, and the street will be closed from Orange Street to Linden Avenue for about a week; the city said the building is not safe for traffic or pedestrians.

The Red Cross was on the scene and is temporarily placing residents at local motels.

“Well that’s good for safety. They need to look at it first, make sure it’s safe to go in there,” said Tony Buntyn, a building resident.

“It’s an inconvenience of course. I’m not apt to want to jump up and be moving around. My mom only lives a few blocks from here but I would rather them go and put me in a hotel so I don’t have to disturb her,” said Duane Logan, another resident.

Logan said he does not expect to return home anytime soon.

“It’s probably worse than it looks . it looks like some of the supports are knocked over, and there’s a huge crack in the bricks on the second story,” said Logan.

Residents were not told how long it would take before their building is fixed and they are allowed to move home.

Police said the crash is still under investigation.