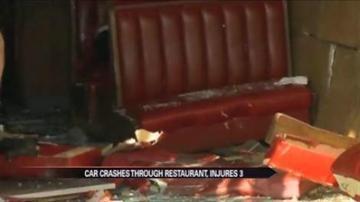 Patrons were having lunch at a restaurant  when a car crashed through the building.

Two of the injured were a mother and son who sat in a booth by the window.

Police say the mother is in critical condition, the son in serious.

A structural engineer was called in to check the building.

So far, police have not identified the driver and say they are still investigating.