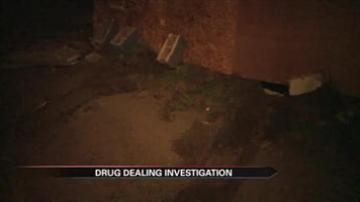 BENTON HARBOR, Mich. -- A car allegedly fleeing from police struck a home in the 800 block of Thresher Avenue in Benton Harbor around midnight Thursday.

Police say four people in a vehicle met up with another person for an alleged drug deal.

The car fled the scene when police arrived and then struck the house. The people inside the car fled after the accident.

The house is owned by a couple with small children, all of whom will have to get along without electricity and gas after the accident.

They also confiscated over $350 worth of drugs at the scene.

Police say they do know the men they're looking for and will be issuing warrants for their arrests.