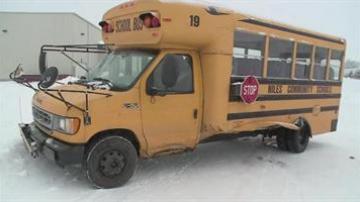 NILES, Mich. -- A car collided with a Niles Community School bus around 3 p.m. Thursday in front of the Bertrand Township Fire Department. Michigan State Police troopers say the roads are very slick and the accident could have been much worse.

According to MSP, three teens were on the bus along with the bus driver when the driver of a Mustang lost control and struck the bus.

Sergeant Ryan Schoonveld of the Michigan State Police said it could have been much worse if the vehicles had been going any faster.

"The cold weather that really hasn't broke yet is probably the biggest factor to it. The roadway through here just never got down to the ice and wasn't able to break that up and really get down to the roads so everything is really still kind of slick out there. I think until it warms up tonight and tomorrow, we're still going to have slippery roads until then," said Schoonveld.

State police want to remind drivers to slow down.