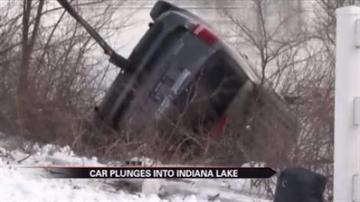 FISHERS, Ind. -- Two minutes is how long it took for an SUV to sink in a Fishers Lake, nearly killing a mom and her 5-year-old daughter.

The mom said she lost control of her SUV sending it into the lake.

Officials say the two were able to free themselves from the vehicle. Those driving by stopped to help.

"The vehicle floated shortly. The occupants were able to get themselves out and then the bystanders went into the water to bring them to shore," said Ron Lipp, Fishers Fire Department.

Rescuers didn't think the two were going to make it but the mother's determination and the help of strangers, they say, saved their lives.