Car slams into tree and rolls over in Elkhart 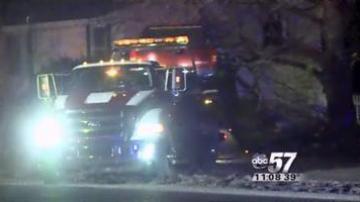 A 20-year-old driver was trapped inside his truck after he slammed into a tree and the truck flipped on its side. It happened at County Road 6 and Dexter Drive, at the North side of the Elkhart Regional Airport.

County Road 6 was closed down in both directions for nearly an hour while crews worked to get the the young man out. The driver was not injured even though his truck was completely totaled.
The driver told police he had looked down at his radio to change the station and that is when he veered off the road. The truck hit a tree and flipped onto the driver's side, which is why firefighters had to cut the roof open to get the driver out safely.
When firefighters pulled the driver from the wreckage, he only had a few minor cuts. Paramedics treated the small cuts, but did not find any other injuries.
The driver was not taken to the hospital and for that police are calling him lucky. "Oh, very lucky. Extremely lucky and so are the people that live in the house behind the trees," says Lt. Brent Long with Elkhart police.