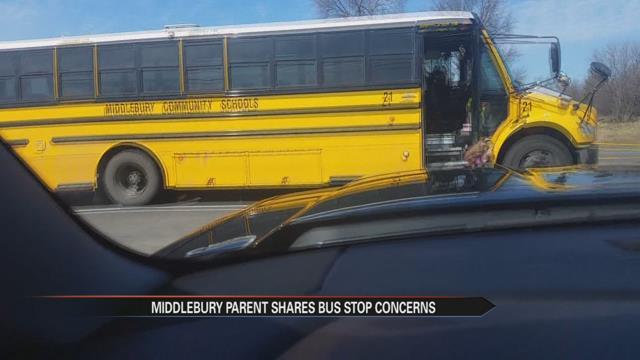 Parents, law enforcement, and the school systems all say careless driving around school buses is a major problem in parts of Michiana.

“They completely ignore the fact that the lights are on and the stop sign is out and they keep driving by,” says Brynnae Bender, whose daughter Amarah attends Middlebury Schools.

Bender took cell phone video after bringing up the issue to both Middlebury Schools and law enforcement.

“I’m trying to do something to let others know what’s going on, because I’ve tried everything and it’s just not ending,” says Bender.

She has directed them to take down license plate numbers and vehicle descriptions.

Willey then turns the information into law enforcement.

She says this process happens daily.

Bender says this has not made her feel better about sending her daughter down the driveway to catch the bus.

“Maybe if law enforcement would be able to do something to try and help out a little bit with re-enforcing the law here so that we know that our kids are safe,” says Bender.

According to Indiana State law, motorist must stop when a school bus is picking up or dropping off children.

This applies to all lanes and both directions of traffic.

The only exception is when a physical barrier is present.

In Elkhart County a traffic ticket cost up to $250.

Middlebury police say they do patrol the area along U.S. 20 and want to reiterate the turn lane is not a barrier, so all lanes must stop.

ABC57 also reached out to the county clerk's office who says they have not seen this type of citation in a while.

So Bender asks the community to just do the right thing.

“Children are very precious and we are the only ones that look out for them and so we need to follow through with that and make sure they are taken care of,” says Bender.