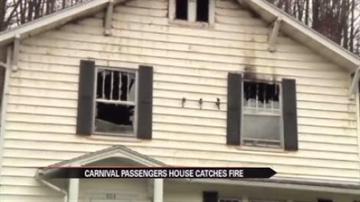 A family returning from a ruined cruise aboard the Carnival Dream learned their house was on fire.

People were calling and texting telling them that their house was on fire.

"At about 2:30, I turned on my phone because the phones were in the suitcase, and all of a sudden my phone was blowing up, people were stating my house had caught on fire," said Walter McNeal, homeowner. "I had to pull over to the side of the road because my blood pressure went up because I talked to the chief of police, I mean the chief of the fire department, I told him be there at a certain time but I couldn't make it."

No one was hurt in the fire.

Officials say the home was about 40 percent engulfed in flames when crews arrived.