Cass Co. gets the brunt of Monday's severe storms 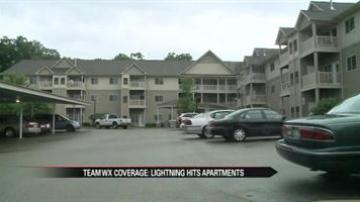 That's all it takes. One strike. One flash.

“We were in the window over there looking out and we saw lightning strike in three places in the building, on the ground and over by the lake somewhere," Stone Lake Manor residents Charles and Fonzo Hunt said.

One lightning bolt to send this Cass County complex into chaos.

“I know we got a lot of rain and a lot of lightning,” Cassopolis Fire Dept. Lt. Mark Majewski said.

And that meant a lot of calls for Cass County first responders.

Severe storms took out power lines, flooded some roads, and at Stone Lake - caused a fire.

“Fire. I told my kids to get their shirts and shoes on, let’s get out of here,” Charles Hunt said.

One resident was shocked by the lightning strike.

“All of a sudden I heard a loud thunder clap and I got shocked,” Dixon said.

The strike hit the building, triggered the alarm system and went all the way to Dixon's apartment where she was working on her computer.

“My hand jumped off the mouse when I got shocked. Temporarily my vision got cloudy and I got a headache where I typically don’t get headaches,” Dixon said.

Paramedics say Dixon will be fine and is lucky it wasn't worse. But now she knows when the lightning is striking in the sky, it's time to close the computer, because one strike can pack quite the punch.

“I was really surprised because I never had thought that could happen,” Dixon said.