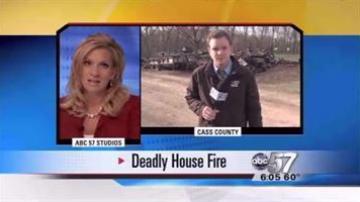 The fire took out the home just before 6 p.m. near the corner of US-12 and Suszeks Road just West of the Cass/Saint Joseph County line.

“It just overtook her heart and she just went out,” said 36-year-old Henry Kern. His mother 64-year-old Arlene Kern was just getting home when the fire was spreading.

According to the Cass County Sheriff’s Department, Henry Kern built a fire in the wood stove that quickly spread to in the home and to a propane tank. Henry Kern said the stove was only unattended for a few minutes before the flames spread to the second floor of the home.

Henry Kern said when Arlene arrived she panicked and tried to get some belongings from inside the home. “She came got her phone out of her car broke the window and called 9-1-1,” Kern said.

Henry Kern said she rested at a nearby tree and watching her home of 40-year-home burn was too much to handle. “Trying to get what she could out of the house it was (overwhelming for her),” he said.

Family said doctors suspect Kern had a preexisting heart condition that the family was unaware of.

A wake for Arlene Kern was set up at Farrand Funeral Home in White Pigeon Saturday from 11 a.m. to 1 p.m. with a funeral following.

Her son Henry said that the Red Cross is taking donations for the family at 5640 Venture Court, Kalamazoo, Mich.