Catch em' all and stay safe 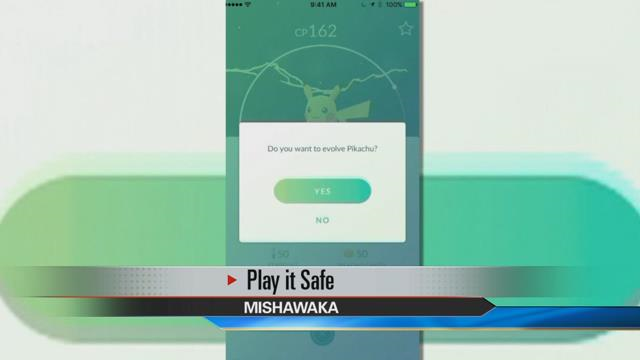 The goal of Pokemon Go is for players to have a good time and catch Pokemon. It is estimated that millions of people across the country have downloaded the smart phone app and are on a quest to catch them all.

The Mishawaka Riverwalk has become a popular spot for people to gather and catch the mythical creatures. Mishawaka Police said they have seen an increase in foot traffic in the area lately.

The positive side of that is that the app has encouraged people to get outdoors, exercise, and spend time with others. However, while on a mission to catch the animals, some people are not paying attention.

He added that officers already patrolled that area frequently but are now doing so even more.

“Our goal is to make sure that our community is safe and that when you’re out and enjoying our great natural resources like our parks, even playing Pokemon Go that you’re going to be safe while you do that,” Williams said.

Mishawaka parks close at 10:30 p.m. and it is important that people abide by that rule for safety reasons.

Williams said that people should use a buddy system when out playing the game as well as always be aware of surroundings.

A new safety concern has popped up the longer that people play the game. “When the kids are walking to school, schools going to be starting not to far away from here. Our concerns are, are there any sex offenders,” he said.

So far Mishawaka police have not seen an instance where this has happened but Williams said it is smart for parents to be proactive and check where their children may be out Pokemon hunting.

If there is any concern that children may be lured near a sex offender's home while playing the game, a search can be done here.