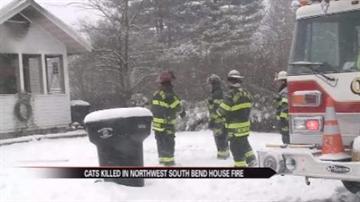 When emergency crews pulled up, they found the back half of the home on Kenwood Avenue on fire.

Firefighters say they were able to get the fire under control quickly.

"Around 9 a.m., our first engine showed up we had heavy flames and smoke coming out of the back. Took about 20 minutes to get it under control," said Nick Tekler, Battalion Chief of the South Bend Fire Department.

There is no word yet on how it started.