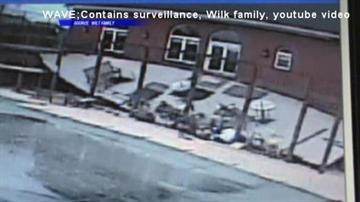 NEW ALBANY, Ind. -- A holiday gathering took a frightening turn when a family posing for a picture fell when the deck they were standing on collapsed. The whole incident was caught on camera.

"Everybody was sitting down and Brittany was about to take the picture....boom. It just went down," said 8-year-old victim Ainsley Wilt.

The collapse was caught on surveillance video.

The victims are suing the deck builder and the homeowner's association that ran the clubhouse where it happened.

The collapse happened on December 22, 2013 during a Christmas party Lisa Wilt was holding for her extended family.

They were all gathered on the deck ready to take a picture when the deck collapsed.

Several family members were taken to the hospital with injuries.

The family says three of those people still aren't walking.

A spokesman with Schuler Homes, the company that built the deck, said the law shields them from liability because the deck is more than 10 years old.

Calls to the president of the Wolf Lake Homeowners Association, the other group named in the lawsuit because it's responsible for maintaining the deck, have not been returned.

The family is now using the video in a public awareness campaign to warn others.