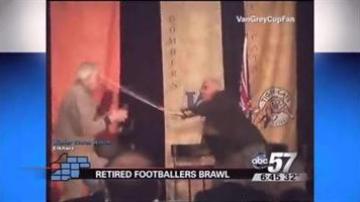 VANCOUVER -- It's the football rivalry that never ended!

Two elderly men broke out into an all-out brawl in Vancouver, and the video online is getting a lot of attention.

Joe Kapp tried to give Angelo Mosca a flower as a peace offering. When it was rejected, Kapp shoved the flower in Mosca's face!  Mosca hit Kapp with his cane.  Then punches were thrown.

Their feud goes back nearly 50 years. At a game in 1963, Kapp clamed Mosca made a hit that took one of his players out of the game.