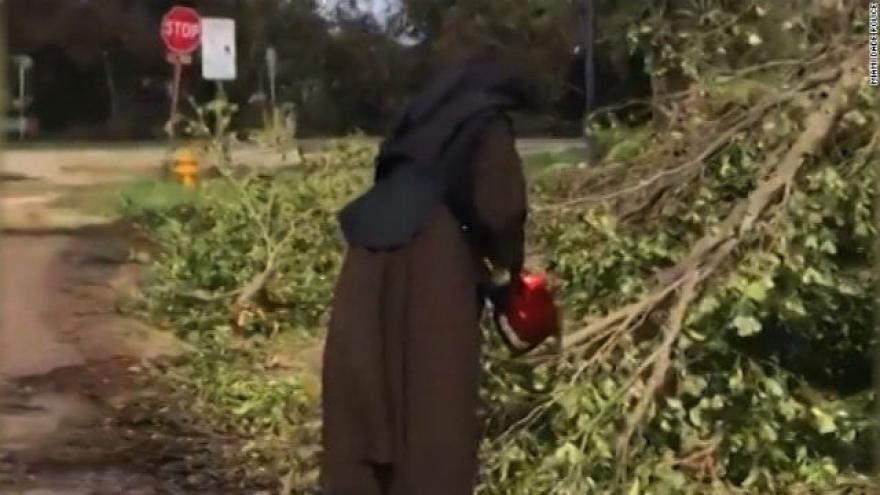 Sister Margaret Ann knew of a chainsaw in her school\'s closet, so she thought nothing of ripping into a downed tree blocking a road. Photo courtesy Miami-Dade Police Dept.

(CNN) -- Across the state of Florida, and up into Georgia and South Carolina, images of first responders have become a welcome sight amid the aftermath of Hurricane Irma.

But among the usual uniforms -- those of police, firefighters and paramedics -- a nun's habit stands out.

And when said nun is wielding a chainsaw, well, that is something that can renew faith in even the most downtrodden.

"There was a need, I had the means, so I wanted to help out," Sister Margaret Ann told Erin Burnett on Tuesday evening.

A 30-year education veteran from Archbishop Coleman F. Carroll High School in West Kendall, Florida, Sister Margaret Ann knew of a chainsaw in her school's closet, so she thought nothing of ripping into a downed tree blocking a road.

"We teach our students: Do what you can to help other people, don't think of yourselves," she said during a live interview on CNN's "OutFront." "That's what I wanted to do."

An off-duty police officer captured video of the chainsaw-wielding nun, sharing the footage on the department's Twitter feed on Tuesday.

"He said, 'You know though, Sister, the police will do this.' And I said 'but it's going to take them too long ... it's dangerous, people are going to get hurt here.' "

Tuesday's guest said she does not know when her school will reopen, as the air conditioner was damaged during the hurricane. Additionally, downed trees cover six of the school's 40 acres, and a wall has been blown in.

In the meantime, Sister Margaret Ann, and those like her, will continue to do the Lord's work.

"The community will come out and help us. That's what we do," she said. "It's good."