Starting December 1st each year, people from near and far come to Michiana ready to ride the snowmobile trails in southwest Michigan. There are over two-hundred miles of groomed trails, but volatile winter weather patterns, including big warm ups and thaws, have made it more difficult to get out on the trails in recent years. This pattern is not going to end, and it could have a negative impact on the snowmobiling industry.

“Snowmobiling is the only thing that is very weather-dependent, because if it doesn’t snow, it doesn’t happen. With water-craft, we always have lakes and water, with ATVs we always have dirt and trails”. This is Shane Stephic, co-owner of Krupps Power Sports in Edwardsburg, one of the few snowmobile retailers left in Michiana.  He says, the “shop opened in 1981, so we have a strong customer base. We are lucky enough to have loyal customers”.

The northwest side of Michiana is considered part of the Snow Belt, an area deemed as receiving a considerable amount of annual snowfall. Despite the ideal location for snowmobile trails, there have been many recent years lacking enough snow to consistently get out on the trails. Mike Reichanadeter, a twenty- year rider and the other co-owner of Krupp’s, remembers better times.

“I think in my earlier years it was more consistent and even prior to my time it was more consistent. Back in the 70s they had a quite a bit more snow than we get now. Luckily snowmobilers are a passionate bunch. It’s not uncommon for someone to buy a snowmobile and drive 10 hours north, knowing they’re going to have to drive 10 hours north to find the snow. It’s that kind of an experience”, describes Mike.

That is what snowmobilers will have to do if current snow trends continue. Trails need to be covered with at least four inches of snow to be ridden, groomed and maintained. ABC57 Meteorologist Erica Horvatin researched the number of days per year with a snow depth of four or more inches, and found that there has been a downward trend in the number of days since 1950. From the late-50s to the early-80s it was fairly common to have four or more inches of snow on the ground for at least half of the winter season. Since the mid-80s, that’s only happened three times. 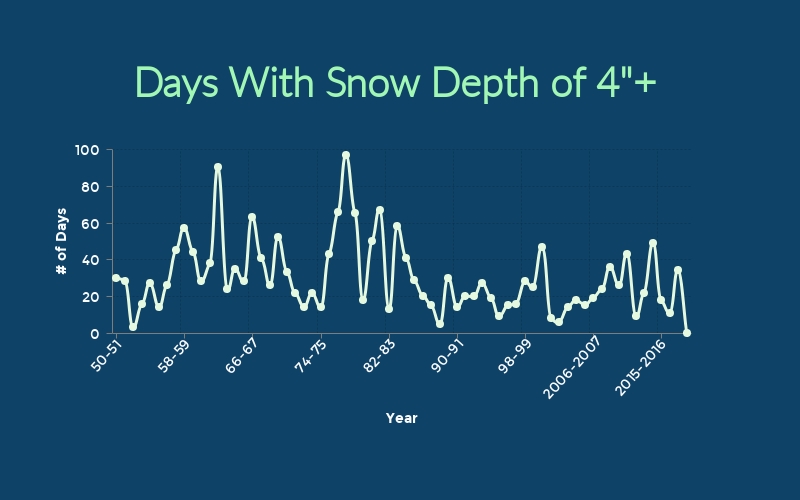 For the snowmobile businesses in Michiana, these are alarming stats. Shane says that “for some people, the snow is enough, and we have a good time around here because there are a lot of trails to ride, but I also see the merit in the thought that it just doesn’t snow enough anymore. Anymore to snowmobile, you better own a trailer”.

Krupps Power Sports has not seen any significant drop in snowmobile sales, and says that the snowmobiling community is dedicated. If worst comes to worse, riders will buy their sled here, and travel north.