Charges filed against driver who allegedly drove into protesters in Mishawaka 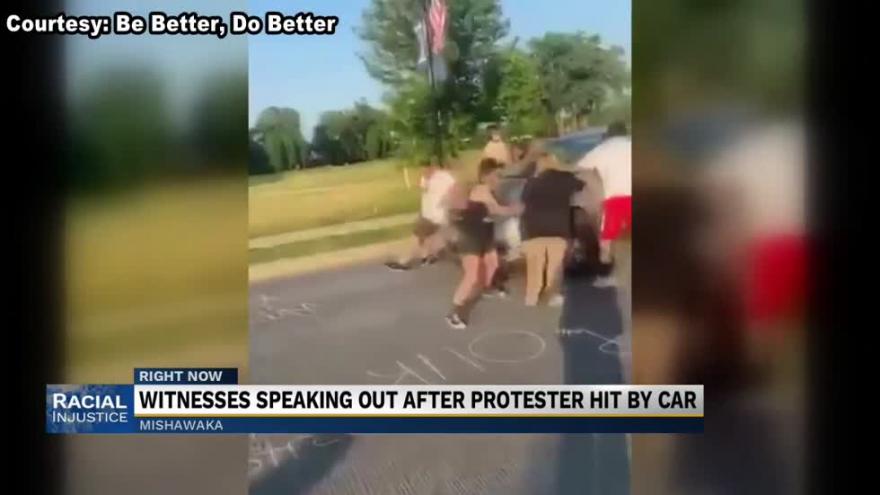 The driver who allegedly drove into a group of protesters on the Main Street bridge on July 4 has been charged with criminal recklessness.

The driver was identified as 48-year-old Glenn Wheet.

The prosecutor's office says citizens responded to their request for additional video of the incident and the charge was filed as a result of the investigation.

Mishawaka Police closed the Main Street bridge to traffic on July 4th by placing traffic cones across Main Street to give demonstrators a safe place to gather, according to the probable cause affidavit.

At 8:07 p.m., Wheet drove a silver SUV northbound on Main Street, turned onto Front Street, drove around the roundabout and headed back to Main Street, reports said.

Wheet turned northbound onto Main Street and over the first line of orange traffic cones, according to the probable cause affidavit.

There were several people in front of his vehicle and on both sides of the vehicle, reports said.

One person pounded on the windshield as the driver continued forward, reports said.

Wheet drove over a second row of orange cones and accelerated away, reports said.

As he drove away, he hit three people and one person was dragged as they held onto the passenger side mirror, according to the probable cause affidavit.

Once he crossed the bridge Wheet drove over another traffic cone and turned onto Mishawaka Avenue, reports said.

Wheet then called 911 to report his version of the events on the bridge.

When police spoke with Wheet, he said "they had the bridge completely blocked by people standing in front of me. I pulled up to them to tell them I have a rightful right to use this road and before I could say anything, they were jumping on top of my car and pounding on my windshield," reports said.

When asked about the traffic cones blocking the road, Wheet said he "thought they placed the cones there and there were no signs saying road closed. I didn't intend to violate anybody's rights, I thought they were violating traffic law. I just wanted to get through and not be assaulted."

An arrest warrant for Wheet has been issued.