Charities say donations are significantly down 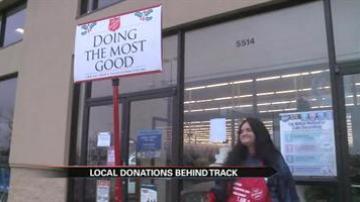 SOUTH BEND, Ind. -- This time of the year, we are all asked to give a little extra to organizations that help people all around the world. But charities in Michiana don't want to be left out or forgotten.

The Red Cross says last year, Superstorm Sandy brought an increase in donations but this year there's been a significant decline in individual contributions.

"There has been a decline over the past year in the gifts that support the local services. The larger disasters capture more attention, and we just need to increase the awareness in people of all that we do and affect that we have on people's lives right here at home," said Sue Gulley, Red Cross Major Gifts Officer.

With so many people struggling, organizations that take care of others say it's important not to forget about our own neighbors who need our help all year round.

Officials at the Red Cross say they have seen a 50-percent drop in donations recently.

For many charities, like the Salvation Army, the holiday season is the most important. The funds raised now are used to take care of people throughout the year.

"Hopefully the donations will start picking up when they see that their neighbors need help too, because if we don't help each other, who is going to help us?" said Martha Gillam, bell ringer for the Salvation Army.

Salvation Army volunteers will be ringing bells at local businesses until the end of December.