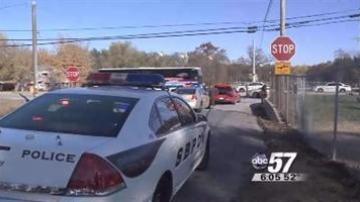 ST. JOSEPH COUNTY, Ind. –  Two suspects hit a dead end when they drove up to the intersection at State Road 2 and Pine Road Friday morning.

Squad cars blocked the road; officers cut off and closed in on the red getaway, the suspects were trapped, forced to surrender.

Twenty-one-year-old Kavion Scott of Elkhart and 19-year-old Miguel Martinez were quickly taken into custody, arrested on preliminary charges of burglary.

This textbook stop was not setup entirely by police. A man, the alleged victim led the suspects’ car right to police and into handcuffs.

The so-called “vigilante” said he was too embarrassed to go on camera or give his name, but he did want to explain what happened and why he was on the heels of a getaway car.

The alleged victim said when he stopped at his house on Quince Road around eleven o’clock Friday morning, there were two men there loading his stuff into their car.

Officers said Scott, the driver took off through the front yard with TV’s, DVDs and jewelry in the back seat, but his partner in crime was still inside.

Martinez ran to catch up, as the car slowed down he hopped in but the man they had allegedly just robbed was right behind them.

In his white pick-up truck, the alleged victim accelerated right into the back of the car, it started to fishtail but regained control as it jumped from the grass to the pavement.

The suspects sped off, but the man was right behind them and he stayed with the getaway car as it raced down Crumstown Highway.

The chase went on for more than three miles, in the car the alleged victim called 9-1-1 and gave them their location and direction.

When the red car made a sharp turn to head up Pine Road, the man said he knew they were headed for the bypass.

Police blocked of f the road, got into position, and waited for the suspects to arrive.

As officers surrounded the car, the white pickup truck pulled up behind the blockade. The man got out to watch as Scott and Martinez were questioned and put into squad cars.

The alleged victim identified the two suspects and his stuff inside the car. Later, officers collected pieces of the car from the man’s yard.

Scott and Martinez are being held at the St. Joseph County Jail without bond.

As for the fender bend at the start of the chase, officers said they will not take action. The alleged victim was trying to protect his property and he rear ended the car while it was still on his property.