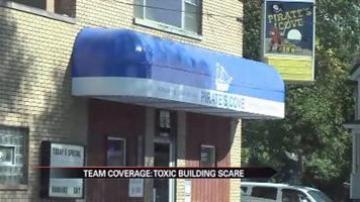 MISHAWAKA, Ind. --  Not only were residents in Mishawaka evacuated from their homes after the factory fire Friday night, but businesses in the area had to shut down as well.

Brenda Johnson was enjoying a beer at Pirate's Cove, when she saw something strange outside the window.

"I was facing the door and I happened to see the hazmat team go by and I said, 'Oh I wonder what is going on?'" said Johnson.

She did not think much of it.

"It was maybe 45 minutes later, the fire department came in and said we had to evacuate," said Johnson.

Pirate's Cove had to shut down for two hours.

"We were all clear to reopen at 10 o'clock last night because we are on the north side of 4th Street," said Pirate's Cove owner, Leeroy Greene.

But that two-hour evacuation cost the owner a big chunk of change.

Greene said he is happy none of his customers got sick.

"With a chemical spill like that, it is very essential they do what they did," said Greene.

But he said he wishes the factory fire did not effect his business.

"I'm happy they looked out for our customers. I am sorry for the loss of business."