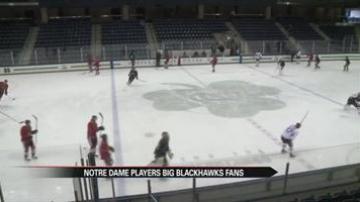 SOUTH BEND, Ind. -- The Stanley-Cup-winning Chicago Blackhawks took to the ice at Notre Dame's Compton Arena Thursday morning during the first skate of their training camp.

ABC57 got a chance to watch the Blackhawks skate Thursday morning.

Off the ice, ABC57 caught up with Fighting Irish left wing Sam Herr, who was star struck.

Herr grew up in Chicago watching the Blackhawks. He said that having the team here is like a dream come true.

"I'm a big Toews and Kanes fan, I respect them so much as players. Toews I think is the best center in the NHL and Kanes, I think, has the best hands in the NHL so it will be interesting to meet them," said Herr.

Herr will get his chance Friday night when the two teams will have dinner together.

He says that he loves that the Blackhawks are skating at Compton - a world class rink - a big reason why the Blackhawks decided to bring training camp to Notre Dame this year.

Like many college hockey players, Herr has his sights on the National Hockey League.

"That's the goal right now. That's the next step after college so we'll see how it goes from there," said Herr.