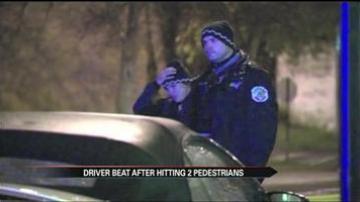 CHICAGO, Ill. --- Three men are in the hospital after a driver hit two people Friday night.

Officials say paramedics called police for backup after people gathered at the scene.

Police say people then pulled the man out of his car and beat him.

One injured pedestrian is listed in critical condition.

The other pedestrian and the driver are listed in serious but stable condition.