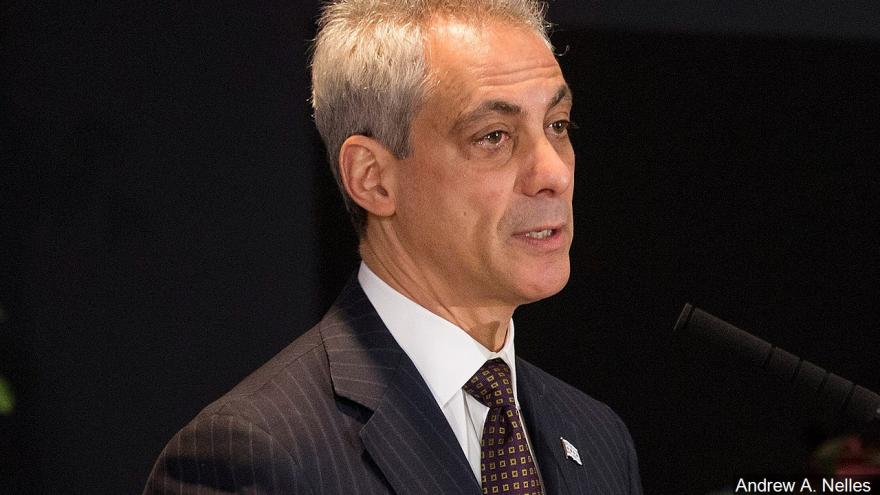 "We want you to come to Chicago if you believe in the American dream," Emanuel, a Democrat, told CNN's Poppy Harlow on "Newsroom." "By forcing us, or the police department, to choose between the values of the city and the philosophy of the police department, in community policing, I think it's a false choice and it undermines our actual safety agenda."

He continued: "So we're going to be filing a case saying that the Justice Department is wrong on constitutional legal grounds that is we will always be a welcoming city ... but it also is true that our police department is part of a neighborhood, part of a community, built on the premise of trust."

On Sunday, Emanuel's office announced that it planned to file a lawsuit against the DOJ over new conditions placed on federal law enforcement grant money requiring local police departments to assist in federal immigration actions.

Emanuel's office said in a statement that the Trump administration's "latest unlawful misguided action undermines public safety and violates" the Constitution. He said the city is challenging the administration "to ensure that their misguided policies do not threaten the safety of our residents."

He added in the statement: "The federal government should be working with cities to provide necessary resources to improve public safety, not concocting new schemes to reduce our crime fighting resources."

Ian Prior, a Justice Department spokesman, said in a statement Monday that "it's especially tragic that the mayor is less concerned with that staggering figure than he is spending time and taxpayer money protecting criminal aliens and putting Chicago's law enforcement at greater risk."

In response to the DOJ's statement, Emanuel told CNN that the number of shootings are down in the Englewood neighborhood because the police has worked with the community.

"We want residents to see the police department as partners to make their city safe," he said.

The suit revolves around new conditions set for an important funding program: the FY2017 Edward Byrne Memorial Justice Assistance Grant, or JAG, which provided federal funding to support local law enforcement efforts, according to the statement.

In July, Attorney General Jeff Sessions announced that going forward DOJ will only provide JAG grants to those that certify compliance with a federal statute that requires localities to communicate immigration information about individuals to the federal government, allow federal immigration access to local detention facilities, and provide the Department of Homeland Security at least 48 hours advance notice before local officials release an undocumented immigrant wanted by federal authorities.

Chicago last year received $2.3 million in JAG funds. Over the years, the city has purchased SWAT equipment, police vehicles, radios and Tasers with the funds.

Applications for the grants in fiscal year 2017 are due September 5. The program is named for Edward Byrne, a New York City police officer who was killed in 1988. He had been protecting a Guyanese immigrant who reported illegal activity to police.

"Look, he has one of the toughest jobs in the world ... he's brought order, there's no doubt. He's a person with great order. He's brought discipline, no doubt, to that effort," Emanuel said.