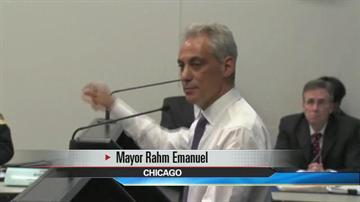 CHICAGO — Chicago officials are looking for ways to reduce crime.

Mayor Rahm Emanuel met with police commanders on Wednesday asking for input on the issue.

He says they need to reduce crime by making arrests more specific.

Emanuel also added officers need to be kept on the streets.

"Yes it's a lot of data it's a lot of statistics, it's a lot of measures," says Emanuel. "But the measure I go for is whether the people of the city feel safe enough because of the work you have done that they can actually live a life of safety."