Chicago students back in classroom after teachers strike ends 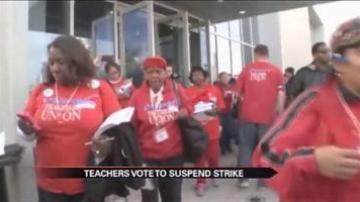 CHICAGO -- Teachers in Chicago headed back to class after more than a week on the picket lines.

Union delegates voted overwhelmingly to formally suspend the strike Tuesday after discussing details of a proposed contract settlement worked out over the weekend. Teachers were upset over evaluations and job security.

The strike shut down the nation's third largest school district.

The union president said the union's 700-plus delegates voted 98 percent to just two percent to re-open the schools.

The new contract calls for a 17.6 percent raise over the next four years, with seniority pay increases that teachers wanted.

"When we started this process, the board gave us a 25-page contract which gutted everything," said Karen Lewis, Chicago teachers union president. "We have worked to get that back."

Teachers are expected to vote on the new contract in a couple of weeks.