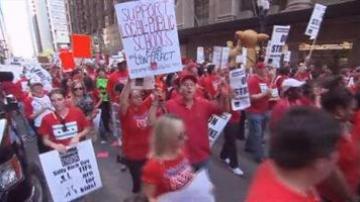 CHICAGO – Three-hundred-fifty-thousand Chicago public school students are out of class for yet another day as teachers continue to strike.

The city's teachers union and the school board failed to agree on a contract Sunday evening. Teacher representatives decided not to accept the tentative deal reached last week.

Instead, they'll give members until Tuesday to consider the details and reconvene for a vote.

Teachers said they want a fair deal, but also want to get back to work.

Chicago mayor Rahm Emanuel is asking city lawyers to file for an injunction that could end the strike immediately.