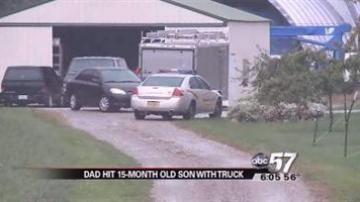 LAKEVILLE, Ind. -- A 15-month-old boy was sent to Riley Children's Hospital after his dad hit him with a truck.

It happened around 10 a.m. on Tuesday, in the driveway of a home on Juniper Road near Lakeville.

Marlin Heatwole told police he had just finished unhitching a trailer, and told his son, Franklin, to go inside their home.

He didn't see the boy walk in front of his truck.

When police arrived, the boy was crying in his dad's arms. He was taken to Memorial Hospital with a cracked pelvis.

"They were concerned about some head injuries. So, they transported him to Riley Hospital where they felt that Riley would be better able to assess his condition given his very young age,” said Sgt. Matt Blank of the St. Joseph County Police.

Police say this appears to be an accident, but they are still conducting a full investigation.