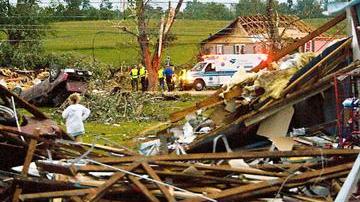 CHELSEA, Ind. - A mother's strength was no match for a deadly tornado that sucked her 4-year-old child out of her arms as the two huddled in a cellar in Chelsea, Ind.

The child and his great grandparents, who were upstairs during the twister, were found dead in a field behind their home.

"We lost a very good farmer, a good neighbor and his wife their great grandbaby," Tony Williams, owner of the Chelsea General Store told ABCNews.com.

Williams said the young mother had surgery last night and is in the hospital.

Forty miles west of Chelsea, in Salem, Ind., a blonde-haired, blue-eyed baby was found alone in a field. Authorities worked overnight to identify the girl's family while she was being treated at Kosair Children's Hospital in Louisville, Ky. The infant is listed in critical condition.

A hospital spokesperson told ABCNews.com today the family had been identified, however he declined to say whether they were alive.

Search crews fanned out as the sun came up this morning looking for survivors and injured people.

Schools were reduced to rubble, businesses were destroyed and families were left homeless by the disaster.

In Henryville, Ind., the town's elementary, middle and high schools were completely wiped out. Receipts from the town were found 150 miles away in Cincinatti, carried by the brutal force of the storm.

"I'm a storm chaser, and I have never been this frightened before," Henryville resident Susie Renner told the Associated Press.

The only structure left standing in the community of Marysville, Ind., was the town's water tower.

"This was the worst-case scenario. There's no way you can prepare for something like this," Clark County Sheriff Danny Rodden told the Indianapolis Star"target=external".

Three bus loads of children, from elementary to high school, rode out the twister in Tony Williams' Chelsea, Ind., store.

"There were a few kids who were upset and crying a little bit," Williams said. "Being a rural community, everyone is really comforting to each other. Right now, we're making sure people have food and a place to stay."

The town of West Liberty, Ky., was completely flattened by the twister. Dozens were reported missing overnight and at least two people were killed.

"The only thing I could think to pray was 'In the name of the Father and the Son and the Holy Ghost,'" resident Martha Jo Hall told the Herald-Leader. "And He took care of us."