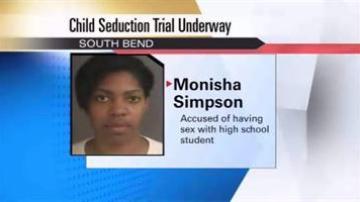 ABC 57's Judi Lykowski was in the courtroom for jury selection that began at 9:30 a.m. A jury of was selected around 1:30 p.m. The jury consists of five females and two males.

The alleged incident started last summer sometime in-between July and August when the Clay High School football team had practice twice a day. At the time 31-year-old Simpson was one of the two bus drivers hired by the district to bus the football players back and forth from practice to their homes.

The student at the time was 16-years-old and said today under oath that he asked her if she would drop all the other players off and take him back to her house. He said she did just that on more than one occasion and that's when their relationship became sexual. He said that he lied and told Simpson that he was 18-years-old. He told the courtroom that they had sexual intercourse on more than one occasion and they also had oral sex as well.

He claimed to have develop feeling for Simpson and said he would lie to the foster family he was living with in order to spend time with her. He said one time he got dropped off at the movies only to get picked up by Simpson a few minutes after. He spoke about getting to know her three children and how one time Simpson bought some groceries for his biological mom and the two of them drove over to her house to deliver the groceries.

His biological mom was also called to the stand as well and asked about his son and the relationship he had with Simpson. She told ABC 57 that she was hoping to put this situation behind her soon and her family could get on with life. However, she didn't want to go on camera and comment officially.

Court proceedings wrapped up around 5:40 p.m. on Thursday and will continue Friday morning in Superior Court Judge Roland Chamblee's chambers at 9:00 a. m.

Trial is expected to wrap up Friday.